Despite all the expectations of a war film suggested by the film’s title, Battle for Sevastopol is anything but a war epic.  The film opens with the arrival of Eleanor Roosevelt in the Soviet Union.  Prior to meeting Nikita Khrushchev, she intends to see a woman who she once met in 1942.  The ex-first lady of the United States thus begins to tell the story of a Soviet woman sniper, Liudmila Pavlichenko, who killed 309 fascists.  Eleanor Roosevelt’s narration sets a frame for the film’s narrative, while flashbacks to Ludmila’s visit to the United States occupy more space in the film than do battlefield scenes.

According to the script, Liudmila Pavlichenko is the daughter of an NKVD officer (father) and a teacher of foreign languages (mother), which is why she is so fluent in English.  She is admitted as a student to the History Department of Kyiv University, but her father does not share the joy she feels about her future career as a historian.  One day during an innocent shooting competition with her fellow students, Liudmila’s shooting talent is suddenly revealed, and she is sent to sniper training for half a year.  The phrase “shooting is not for women” once uttered at the beginning of the film is then refuted throughout the narrative. 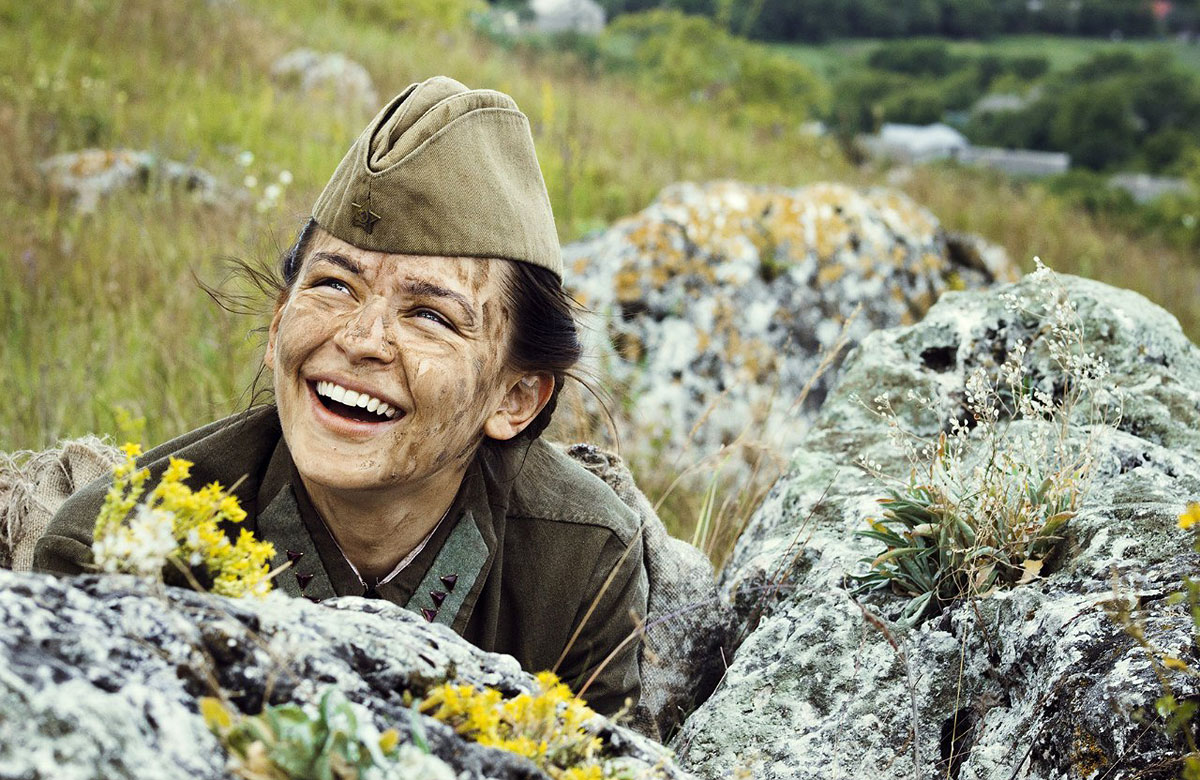 Liudmila is a stern young lady who hardly ever smiles or participates in conversations about men.  At times it seems as if she had been a cold-blooded sniper since childhood.  The only time she reveals her emotions is when she asks her mother to let her wear her mother’s dress on the occasion of her admission to the university.  Liudmila’s only interests are books and, eventually, guns and counting the number of killed fascists, whom she does not perceive as human beings, but, rather, as targets and numbers in her notebook.

Even before the war begins, talk about it permeates the film.  The war is announced when Liudmila is visiting the family of Boria, a Jewish boy who loves her and wants to marry her.  He tells her at the opera that she does not have to go to the front because she is a woman.  Liudmila, however, does not listen to him; she feels it is her duty to be on the battlefield.  The atrocities of war traumatize her; the war, in addition, takes away her friends and the three men that she loved.  This is a story of a woman in war, deprived of her femininity.

It is eventually Eleanor Roosevelt who reminds Liudmila that she is a woman after all and offers her a delicate dress to wear instead of her rough military uniform.  The peak of friendship between Liudmila and Eleanor happens when they cook a borshch together. When a frying pan suddenly slips out of Eleanor’s hands and falls onto the kitchen floor, however, the sound frightens Liudmila and reminds her of war’s horrors.  At the age of twenty-five, her psyche is already broken; she was irreversibly changed by the war to the extent that she will never be able to enjoy peaceful life any more. 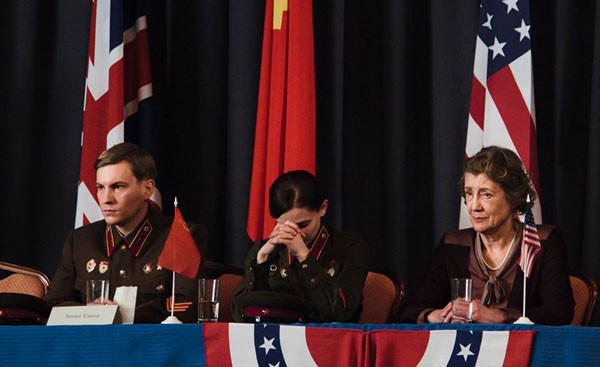 The film is based on the life story of a real woman who was a Soviet sniper during World War II and did go to the US in 1942. These are the only facts, apart from the name, Liudmila Pavlichenko, that have any connection to history.  The filmmakers did not intend to reproduce her biography truthfully.  Their approach to the life of the woman is very selective, with the choice of only those elements that can make a good Hollywood-style drama. For the purposes of the script, Pavlichenko acquired noble origins and became a student of a prestigious university.  In real life, before she went to the front, Liudmila Pavlichenko used to work at a factory and had a son who was born when she was sixteen.

While the relation to Pavlichenko’s biography in the film is very schematic, there is also very little connection to the battle of Sevastopol.  The film concentrates primarily on the personality of a strong woman, her relations with men, and her friendship with the American first lady.

The film is a product of Russian and Ukrainian combined efforts, and was intended as a film reflecting the cultural memory of both countries.  Funded with Ukrainian money and made at a Ukrainian studio, the film has a Russian cast.  As a film made by a director who spent half of his life in Ukraine and half in Russia, Battle for Sevastopol / Nezlamna was supposed to unite the two countries based on their cultural legacy.  While it was generally well accepted in both Ukraine and Russia, there were also viewers who found it anti-Ukrainian or anti-Russian.  It can be interpreted both ways, depending on the ideology the audiences share and what contemporary meanings they want to imbed into the narrative.  Any historical representation of the common Russo-Ukrainian past in the conditions of current political and military tensions will inevitably elicit controversy.  The release of the film under different titles in these two countries, however, has political motivations.

In the wake of the annexation of Crimea in March 2014, the title Battle for Sevastopol was not acceptable in Ukraine, which is why it was renamed Nezlamna (The Unbreakable One).  The film montage in both versions is the same, with the only difference being that Nazlamna is dubbed into Ukrainian.  The movement of the actors’ lips, however, indicates that the film was shot in Russian.  The Ukrainian language, in the meantime, fails to reproduce the specific Jewish accent used in Russian for a comic representation of Boria’s family, which is why anti-Semitic undertones are absent in Nezlamna. The Ukrainian title, furthermore, better corresponds to the film’s overall topic.

The film is a rich visual pleasure, telling the story of a personal drama of a woman at war.  It makes one think about the traumas of the war and invokes painful memories of the past.

Sergei Mokritskii was born in 1961 in the Zhytomir region, Ukraine.  In 1991 he graduated from the Department of Cinematography at the Gerasimov Institute of Cinematography (VGIK). He has worked at Mosfil’m and Odessa film studios, made documentaries and TV shows, participated in the script writing of Teacher’s Day (2012), and worked as a cameraman in films: Sex, Coffee, Cigarettes (2014), Shift (2006); Rostov-Papa (TV, 2001), Diary of a Killer (2002), and others.