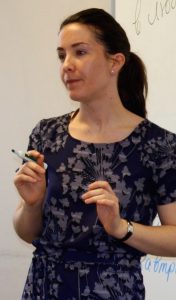 Alyssa DeBlasio is Associate Professor and Chair of Russian at Dickinson College, where she also contributes to the Film Studies program and Philosophy Department. In 2014, she published The End of Russian Philosophy (Palgrave Macmillan), and her second book,  The Filmmaker’s Philosopher: Merab Mamardashvili and Russian Cinema , is coming out in 2019 with Edinburgh University Press. For her work on contemporary Russian film, philosophy, and culture, she has received grants from the American Council of Learned Societies, the National Endowment for the Humanities, the U.S. Department of State, Fulbright, the American Philosophical Society, and the Yegor Gaidar Foundation. Together with Mikhail Epstein, she edits the only on-line English-language resource on contemporary Russian philosophy, Filosofia: An Encyclopedia of Russian Thought.