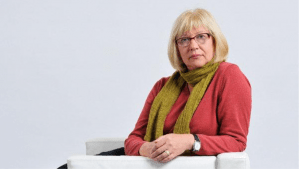 Alena Solntseva is an associate professor in the Department of Cinema and Contemporary Arts at the Russian Humanities University
(Moscow). She has a doctorate in art history and is a member of the Guild of Film Scholars and Film Journalists, a member of the Academy of Cinema Art (Nika), a member of the Steering Committee of the Guild of Film Scholars and Film Critics, a member of the Selection Committee of the Russia National Film Festival Kinotavr.  She graduated from GITIS (the State Institute for Theatrical Arts in 1980.  She is the author of many articles on contemporary theater and cinema, published in Teatr, Seans, Iskusstvo kino, Petersburg Theaterical Journal, Ekran i stsena, Ogonek, Itogi, Vremia novostei (cultural editor), and others.